WELCOME TO MY BLOG !
PLEASE LEAVE ME A COMMENT OR EMAIL TO HELP ME IN IMPROVING MY BLOG !

LOSING ALL IN GET-RICH SCHEMES.

PETALING JAYA: The lure of making a fast buck or easy money has opened up opportunities for various organisations to come up with ingenious ways to attract the public to invest.

Such schemes, known locally as “skim cepat kaya”, have made Malaysians lose millions of ringgit.

According to the police’s Federal Commercial Crime Investigation Department, there were 17,311 cases opened for investigation last year, a massive jump of 26.6% from 2007.

The department said that one bright spot in all these cases was that actual financial losses were down to RM845mil last year, compared with RM1.9bil in 2007.

Most of these schemes thrived in “grey areas” which can only be loosely regulated despite the best efforts of the authorities to clamp down on culprits.

Many of them operate under the guise of multi-level marketing operations which blur into pyramid schemes, which are illegal.

A market observer pointed out that these establishments would promise returns that even top fund managers found hard to attain in good economic times.

Many of them operate like Ponzi schemes which made no or little actual investments from money collected from the public.

Often in such schemes, the earlier investors would usually get some returns, compared with those who join later.

Surprisingly, many of those who are employed as agents with these businesses do not think such schemes are illegal.

“How can it be a scam when I can make money?” an agent attached to an established restaurant chain said.

The restaurant has half a dozen outlets in the Klang Valley and offers the public membership for a fee which entitles them to make money from eating at the outlets and through referrals.

What makes it interesting is that several of these establishments found taking deposits or cash from the public have been operating for a number of years without ever being questioned by the authorities if their operations are legal.

In the past one-and-a-half years, there has been a significant rise in such operations.

Their aggressive and “successful” marketing approach has even become somewhat of a trend, and has been adopted by many other restaurants to boost sales.

If one were to google the term “scams in Malaysia”, one would find a slew of businesses which concerned citizens have exposed as a “bit dodgy”.

However, the people who run such operations appear nonchalant about the amount of media and Internet attention on their businesses.

They are able to navigate their way around existing laws and capitalise on their marketing strategies before the law catches up with them.

Starprobe decided to investigate a number of these business operations to find out their modus operandi following a number of helpful suggestions from concerned readers and members of the public, especially cases which relate to non-financial institutions.

The response from an official of the Registrar of Companies (ROC) was that it had no jurisdiction to control the activities of such companies.

“If the company is registered with an identifiable business, how they market their products or services is not within our purview,” the official said.

But with regards to companies illegally taking deposits without having an investment licence, Bank Negara has the right to investigate and prosecute them. In fact, from last year until now, 19 companies have been under investigation and raided.

While the authorities are trying their best to enforce the laws, the sheer number of these operations make it an uphill task.

The situation is compounded by having different agencies with different jurisdictions conducting investigations independently, thus not giving a clearer picture.

For example, Consumer Claims Tribunal chairman Rungit Singh said his tribunal has jurisdiction only over consumer complaints and concerns. The tribunal is under the purview of the Domestic Trade and Consumer Affairs Ministry.

“Once a person invests in a scheme, that person is not protected under the consumer laws,” Rungit Singh said.

According to him, consumer laws only cover complaints regarding goods and services and do not have jurisdiction over investors.

And on multi-level marketing, an official from the Consumers Association of Penang said such companies were perfectly legal as long as they were licensed by the Domestic Trade and Consumer Affairs Ministry.

“However, some multi-level marketing operations get into grey areas when the bulk of their sales are not derived from products or services but rather from other forms of collections,” she said over the phone.

She added that a sign of a possible scam was when most of the earnings of the company is derived from activities unrelated to the sale of goods or services.

According to a commercial crime lawyer who did not wish to be named, the law regarding legal and illegal activities was clear.

“However, access to critical information may be time-consuming and the prosecution of those who deliberately go against the law will require substantial evidence,” he said.

The lawyer said there was a need for easier and quicker access to information on registered businesses, possibly delivered via a centralised system and an oversight board with experts for the public to turn to for complaints, advice and information on confirmed scams.

“There is a need for a quicker mechanism to identify and respond to scams before more people lose their money,” he said, adding that many of the scams had invested little in their marketing strategies and did not have a business continuity plan.

The lawyer said it should be noted that there were also a number of people who were either gullible or prepared to take higher investment risks driven purely by greed, despite the best of advice.

A source who tracked such scams said it was near impossible to keep tabs efficiently on them.

“That’s the biggest problem, there are thousands of such scams involving hundreds of millions of ringgit out there that the relevant agencies are not able to track all of them. They’re only able to pursue the ones that have been brought to their attention,” she said.

She added that the answer was not more regulation but more awareness of such scams.

“Awareness is better now than before, we have more inquiries coming in on various businesses,” she said.

IS IT TRUE THAT WE DON'T NEED RM 1 MILLION TO RETIRE WELL?

According to an economic specialist, Datuk Prof Ismail Mohd Saleh and an Universiti Sains Malaysia social science lecturer, Associate Prof Dr Kamaruzaman Askandar, we don't need RM 1 million to retire well. RM 120,000 will be enough if we want to retire well. Please click The Star Online for details about this issue.
Is it really true that we just need RM 120,000 to retire well? If it is true, then why do so many experts keep saying that EPF is not enough for us to retire? If it is not true, then what happens to the quality of professors in Malaysia?
If you have any constructive opinions about this issue, please post a comment here. Your sharing here is very much appreciated in advance.
Posted by AIA BERHAD 5 comments: 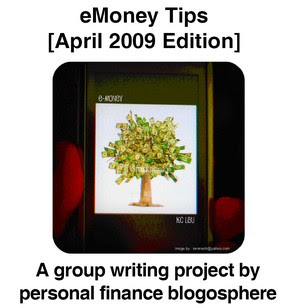 Source: kclau.com
I am glad to announce that the first edition of eMoney Tips e-book is finally published and ready for download for free. Congratulations to all the contributors especially KCLau (Founder and Organizer), Ken Neoh (Cover Designer) and Yow Chuan (Editor).
eMoney Tips is an e-book that shares the ideas and tips of personal finance such as wealth creation, insurance, investment and so on.
As I have mentioned before, the e-book can be downloaded for free by anyone provided that readers don't sell it for money. Readers who have downloaded it can help us to distribute it in whatever ways to anyone provided that all the contents of the e-book remain unchanged.
Please click here to download the e-book. After reading it, please give me constructive comments to help us to improve.
For those who are interested in contributing to the group writing project in the future, please click eMoney Tips for details.
Posted by AIA BERHAD 2 comments:

For details, please click The Star Online and Business Times.
Posted by AIA BERHAD No comments: